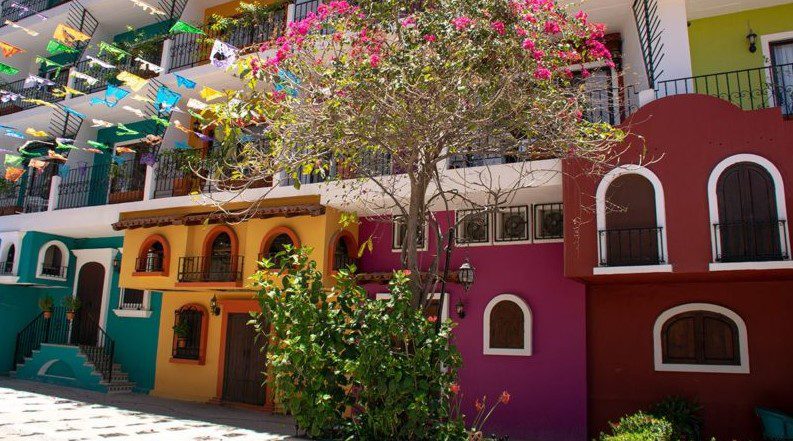 Things to Do in Puerto Vallarta

If Puerto Vallarta could be boiled down to one snapshot, it would be its iconic Malecon. This mile-long walkway that hugs the coast takes visitors on a journey from Centro down to the Zona Romantica, or the historic district.

Along the way, travelers can take in the stunning views of the Bay of Banderas and jungle-covered mountains; see the beautiful red-tiled roofs of downtown; stroll past many of the hottest restaurants; and view the city’s sculptures, beaches, and live street performances.

The Malecon is also closed to vehicle traffic, which means you can take your time as you stroll. It’s also a perfect spot for a morning run. It ends at one of Puerto Vallarta’s most famous beaches and the iconic sail-shaped pier.

At any time of day there is something happening along the Malecon, and it’s the premiere spot where locals, tourists, and expats come together. 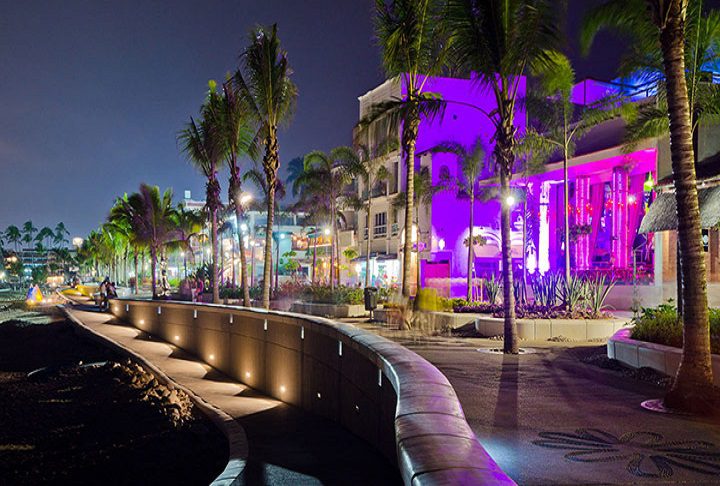 Take a step back in time and experience the very heart and soul of the original Puerto Vallarta. The Zona Romantica is the city’s historic district, and is one of the most visually pleasing parts of the city.

Cobblestone streets and alleys are flanked with historic buildings, each capped with the trademark red-tile roofs. Purple bougainvillea blossoms arch over side streets, creating brilliant pops of color.

The Zona Romantica begins at the bridge over the Rio Cuale. Here, you will find the Old Farmers Market and some of the city’s more popular beaches, restaurants, art galleries, and boutique hotels. It is also where the largest concentration of expats live, so you’ll find it’s very tourist-friendly.

The Pier is one of the most important attractions in this part of the city, from which you can grab a water taxi to many of the surrounding areas, or hire a boat tour to take you around the bay for an incredible view of the city from the water.

Our Lady of Guadalupe Parish

If you’ve seen the skyline of Puerto Vallarta, then you’ve surely seen the Parish of Our Lady of Guadalupe, or the Parroquia de Nuestra Señora de Guadalupe. This icon of the city is known for its red-brick facade and the regal crown that sits perched atop its steeple.

Activity is always buzzing around the church and in the square directly in front of it. The bells ring every 30 and 15 minutes prior to each service.

From December 1 to 12, it’s particularly frenetic around the square, as the city celebrates the Feast of Guadalupe. The city comes alive with parades, dancing, decorated floats, and music. 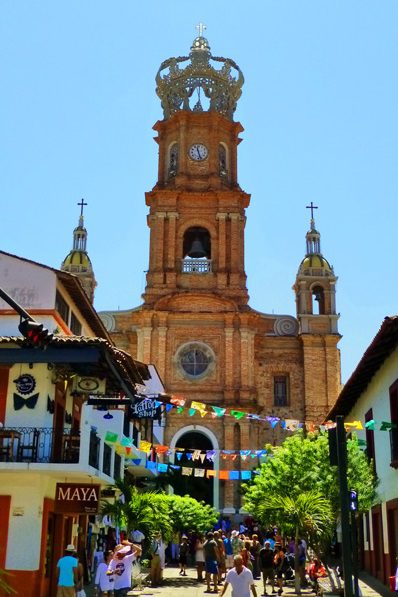 Puerto Vallarta has some of the most beautiful beaches in Mexico. Unfortunately, those beaches are not in the city. The city itself is fringed with shoreline, but these beaches tend to be incredibly crowded and packed with restaurants and activity.

For a more tranquil beach experience, your best bet is to get out of town — slightly. To the south of Puerto Vallarta are two important beaches: Playa Las Gemelas and Playa Mismaloya. Playa Las Gemelas is a discreet beach to the south of Puerto Vallarta on a stretch of sugary sand. It’s a local beach, meaning you won’t see many tourists here, but that’s part of its magic.

Playa Mismaloya is in the next small beach town down from Puerto Vallarta, called Mismaloya. In fact, it was this beach that put Puerto Vallarta on the tourism map, as it was the scene of the 1964 film, Night of the Iguana, starring Richard Burton. 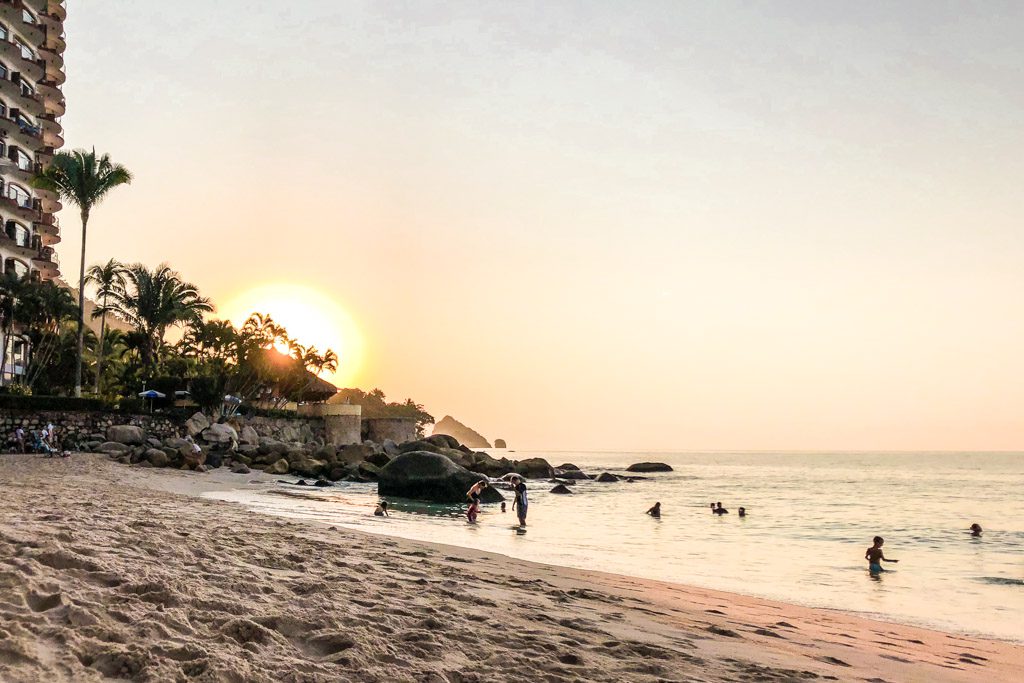 Puerto Vallarta thrives on its coastal location. Life revolves around the water, whether it’s fishing, boating, or simply lying by the beach. One of the best ways to enjoy the city is to get out on the water. The Bay of Banderas, the body of water on which Puerto Vallarta sits, is one of the largest bays in the world.

It’s teeming with wildlife, from hawksbill turtles and octopuses to whales, dolphins, and so many different kinds of fish. In fact, it’s rare to be out on the bay and not have a dolphin or whale sighting.

Several boat companies take visitors out on the water for an afternoon, whether it’s cruising around the Los Arcos natural monument; visiting beaches only accessible by boat, like Yelapa or Las Animas; or a wildlife cruise.

The Day Sailing on Banderas Bay explores the bay and allows a chance to go snorkeling and swimming. All equipment as well as snacks and beverages are included. 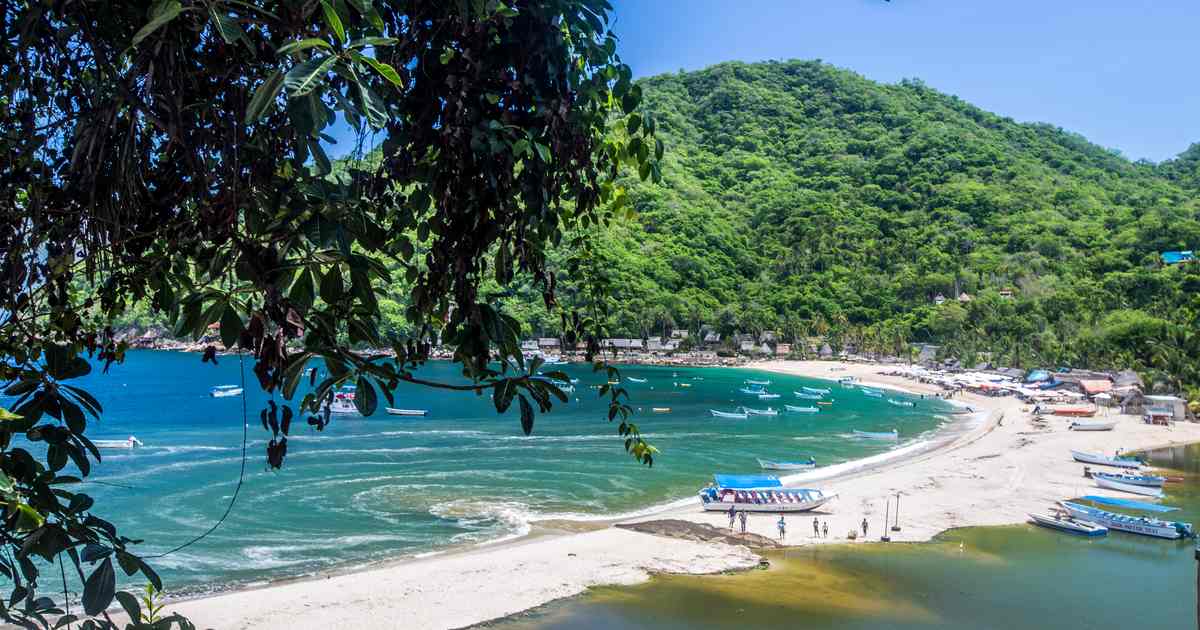 After you’ve seen Puerto Vallarta from the water, it’s time to see it from the sky. Puerto Vallarta enjoys a unique location, nestled between the sea and the mountains. The city climbs back up into the green-carpeted hills, making for picture-perfect vantage points over the entire city.

One of the best (and best-kept secrets by locals) is the Cerro de la Cruz lookout. Perched high above Centro, this lookout point offers a bird’s-eye view over the entire city, the bay, and north into Nuevo Vallarta and the hills of Punta Mita.

Climbing is not for the faint of heart, as it is a straight shot up, but the view is entirely worth it, as the red-roofed city unfolds before you. In high season, a funicular is available, which operates between 6am and 10pm. The climb lasts anywhere from 15 to 40 minutes depending on your level of fitness.

A few years ago, Mexico’s Secretary of Tourism started bestowing the designation “Magic Town” to several towns in Mexico that had held on to their cultural heritage and charm. This title was given to towns that exemplify historic, authentic Mexico, and they can be found all over the country.

Near Puerto Vallarta are three Magic Towns that give a very different look into life in the state of Jalisco. The first is San Sebastian del Oeste. San Sebastian owes its history to the mining days of Mexico, which peaked during the colonial period. A trip here is a step back in time to the old mining days, with preserved churches, ranches, and even old mines. The mountain town is shrouded in lush trees and blanketed in fog, giving a completely different experience from the beaches of Puerto Vallarta.

The next is Talpa de Allende, which is a village veined with cobblestone streets and lined with brilliantly colored buildings. Visit the central church, which blossoms with bright purple bougainvilleas. The church is often the stopping point for pilgrims coming to pay homage.

Finally there is Mascota, which sits tucked among the tall pine and oak trees of the Sierra Madres. The fresh, mountainous town is known for the unfinished church, the Temple Inconcluso de la Preciosa Sangre, which sits at the center. 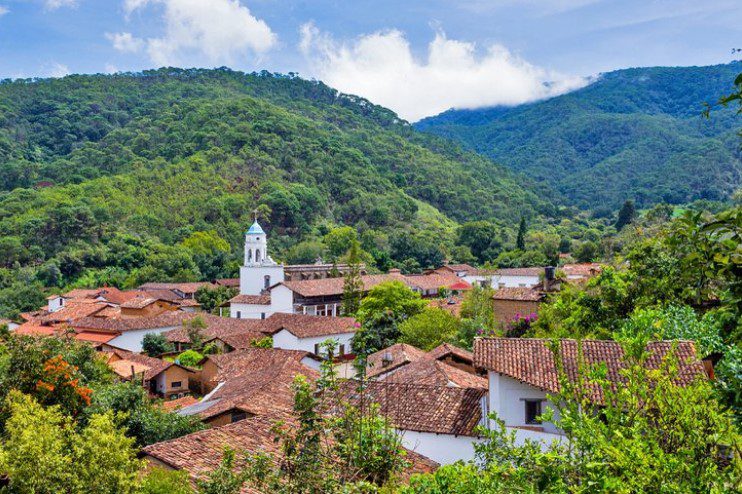 You won’t find chain restaurants or even mainstream hotels here. It’s all about guesthouses, small hotels, and a handful of palapa-style beach restaurants. Airbnb is alive and well here, though, which can be an attractive option if you want to cook your own meals.

Keep in mind that supermarkets are non-existent, so it’s all about what you can score at the local “market.” But more often than not, people hole up at the beach restaurants for deliciously fresh food, minus the price tags from Puerto Vallarta.

The water is a shimmery turquoise-green, which pops against the golden sand and jungle-backed hillside. If you are looking for an escape from your escape, Yelapa is certainly the place to visit. 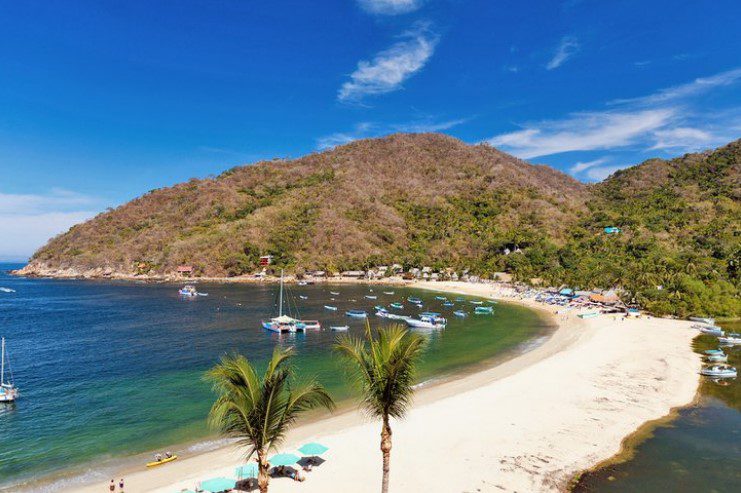 When Richard Burton came to Puerto Vallarta to star in John Huston’s film, he fell in love with the city, and decided to have a house here for himself.

But that wasn’t enough. He was in the throes of a tumultuous and scandalous relationship with Elizabeth Taylor and arranged for her to stay in a casita across the street from his, known as Casa Kimberly. Burton had a bridge built between the two casitas, over the street, as a way for the lovers to visit each other without having to wade through the flow of paparazzi.

In 2010, the villa opened as a luxurious boutique hotel, with its nine rooms decorated in the style that Taylor and Burton would have been familiar with. A pink marble, heart-shaped tub, the central pool, and the bridge have all been restored. The hotel’s nine suites are decked out with sparkling chandeliers, luxurious bathrooms, wide patios, and private plunge pools, all overlooking the roofs of the city.

The restaurant, The Iguana, is one of the best in the city and has a killer view, to boot. 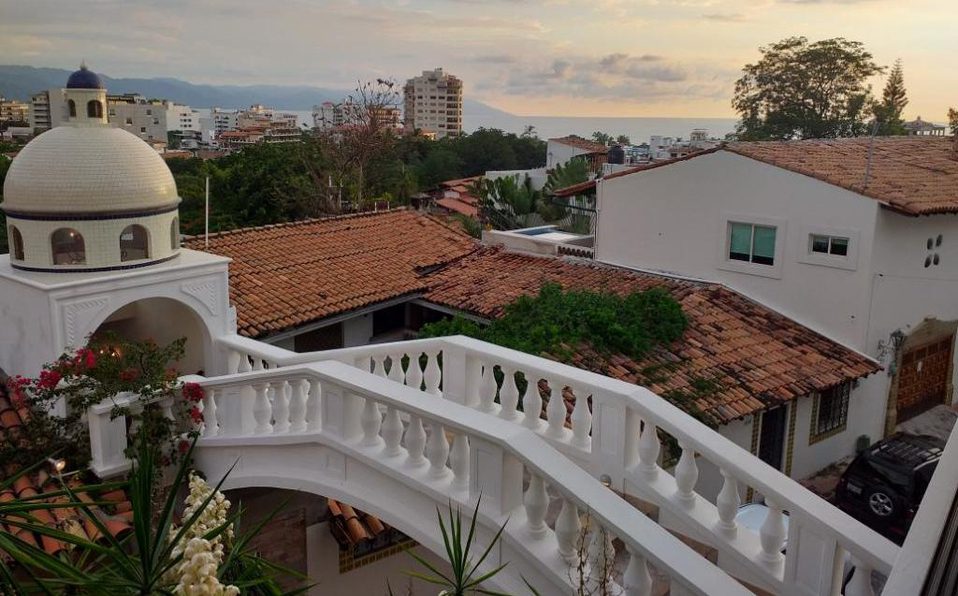 Wildlife abounds in this government-protected natural area. Islas Marietas is a group of uninhabited islands that sit out in the Bay of Banderas off the coast of Puerto Vallarta and the neighboring state, Nayarit. The islands are protected from human access to preserve the native and rare wildlife species that live here.

When it comes to visiting the islands, many options exist. Visitors can book a tour with a local tour operator, like Vallarta Adventures, which can arrange everything from snorkeling the islands to kayaking or paddleboarding around them. It’s also a popular site for scuba diving.

One of the best parts of Islas Marietas is the hidden beach that lives inside one of the islands. When the tide is just right, swimmers can swim through a narrow channel and emerge into an open-air cave that has a quiet, pristine beach, hidden from public view. It’s one of the more magical ways to experience Puerto Vallarta. 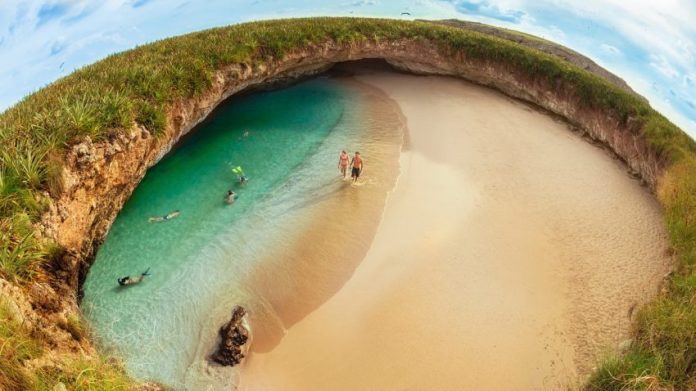 Technically not in Puerto Vallarta, Sayulita is just over the border in the state of Nayarit, but makes a perfect (and common) day trip from Puerto Vallarta. The bohemian surf town used to be sleepy and geared toward backpackers and surfers. But recent discovery has morphed it into a veritable cultural gem all its own, packed with small restaurants, boutiques, and art galleries.

Stay away in high season, like around Easter and New Year’s, when the shores are teeming with tourists. But during the week and in shoulder season, you can still find the fishing village charm that Sayulita old timers still remember wistfully. 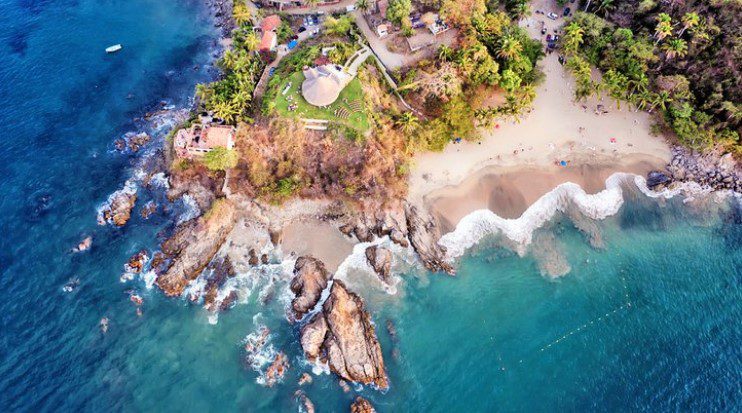 Escape the fray of Puerto Vallarta’s downtown with an excursion to the Jardin Botanico de Vallarta (Vallarta Botanical Garden). Here, you will find a wide assortment of brilliantly colored wildflowers, including one of the most-visited public collections of orchids in Mexico.

Discover plants like cacao, agave, vanilla, cacti, and magnolias, as well. It’s also possible to see parrots and different species of hummingbirds. It’s much more than gardens that you’ll find here — discover hiking trails, a restaurant, and even a section of river that visitors can swim in. 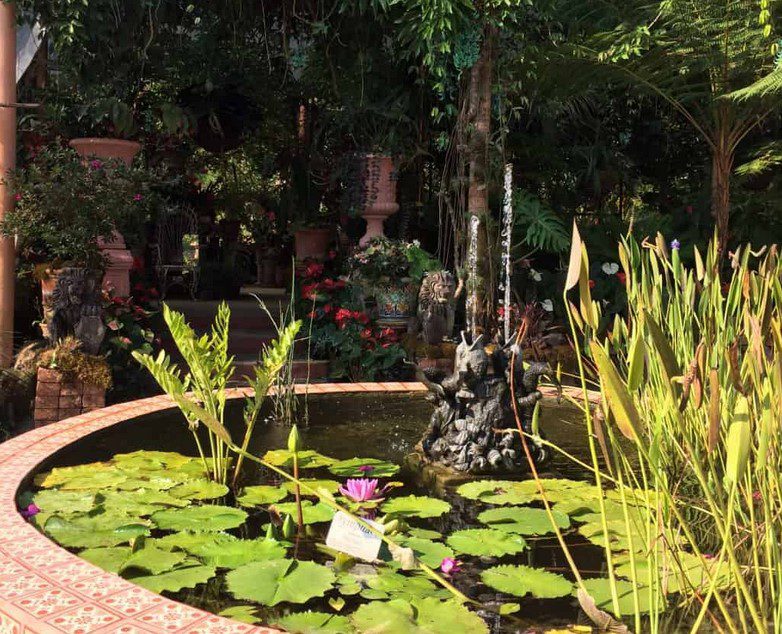 Please fill in the log in or register forms